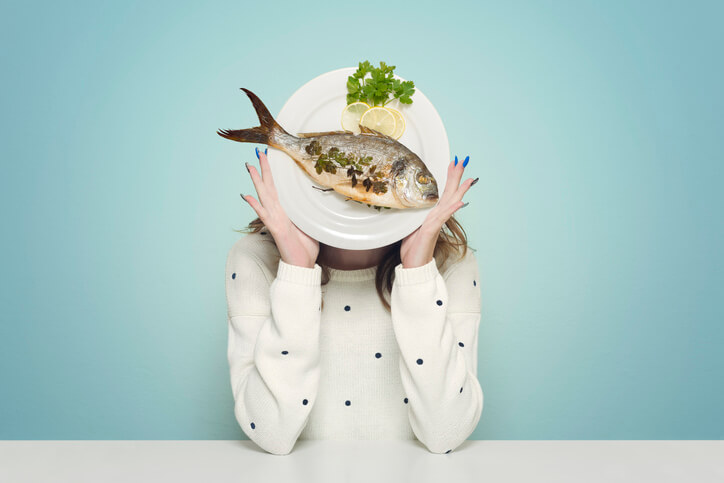 Is The Pescatarian Diet Safe?

Singer and actress Janelle Monáe is usually in the news for one of her hit songs or films. But recently, the 34-year-old star was a major topic of discussion for sharing her battle with mercury poisoning.

She believes that following a pescatarian diet caused her illness.

A pescatarian diet is basically a diet in which the main source of animal protein comes from fish and other seafood. So beef, chicken, pork and sometimes eggs are off the menu for pescatarians. Some people adopt this diet because fish is lower in saturated fat compared to other animal proteins. Fish is also a great source of omega-3 fatty acids. The pescatarian diet also includes a lot of nutrient-rich fruits and veggies.

Now to put it simply, mercury poisoning is a type of heavy metal poisoning.

“Heavy metals can get in your system in different ways. You might breathe them in, eat them, or absorb them through your skin. If too much metal gets into your body, it can cause heavy metal poisoning,” reports the National Institutes of Health (NIH).

(Other types of heavy metals include lead, arsenic, cadmium and aluminum, just to name a few).

Mercury poisoning is one of the most common types of heavy metal poisoning in the United States.

There are actually three different kinds of mercury that may cause health problems (per the National Institutes of Health (NIH)):

In the United States, the most common way that people are exposed to mercury is through eating fish that have consumed methylmercury.

But how do these fish get the methylmercury?

The Environmental Protection Agency (EPA) explains that mercury gets into the air from things like emissions from power plants.

Mercury is naturally found in coal and other fossil fuels. So when we burn these fuels, mercury gets into the atmosphere.

(We all most likely have some trace amounts of mercury in our bodies, but it’s usually only when the mercury level gets too high that we may be entering dangerous territory).

The mercury in the atmosphere eventually settles into land and bodies of water. The EPA reports that microorganisms in water bodies can then convert mercury into methylmercury, and then it builds up in fish and shellfish.

Levels of mercury in fish and shellfish depend on what the fish eat, how long the fish live and how high they are on the food chain. Fish that live long and are higher on the food chain tend to have higher mercury levels. So if we eat a lot of fish and seafood, we may be exposing ourselves to too much mercury.

(Reportedly, methylmercury is absorbed into the body around six times more easily than inorganic mercury).

In some cases, you may have a higher than ideal level of mercury in your body but not experience any noticeable symptoms. This is why testing for heavy metals, like mercury, in your body is so imperative.

Back in 2005, actress Daphne Zuniga shared that she too suffered from mercury poisoning due to consuming too much fish. In one report, she said that she was eating tuna four times a week and also sometimes ate sushi four times a week. (The mercury levels found in traditional sushi dishes have always been a paramount concern). Zuniga said she had trouble remembering her lines, experienced depression, suffered from cramping in her fingers and feet, among many other symptoms.

In a 2013 interview, Janelle Monáe attributed her beautiful, glowing skin to eating lots of vegetables and fish, which suggests that she had been including a lot of fish and seafood in her diet for years.

Recently, Monáe did not go into great detail about the symptoms she experienced, but, luckily, she is in the recovery process. She did share that she is ready to be a mother, so it is especially important that she gets her mercury levels under control.

Being exposed to mercury can impact an infant’s brain and nervous system development both during pregnancy and after birth. According to the Centers for Disease Control and Prevention (CDC), mercury can pass from mother to baby through the placenta and can also be passed in smaller amounts through breast milk.

So ladies, if you are trying to conceive, have your mercury levels tested first. There is also evidence which has suggested that mercury exposure may affect male fertility and sperm quality, so men should be tested as well before trying to have a baby.

A simple blood test can determine the level of mercury in your blood. I highly recommend taking the pH Toxins test, which tests for mercury, other heavy metals and chemicals found in the environment such as Bisphenol A (which is found in some plastic containers and water bottles).

So should we not eat fish?

It really depends on the individual, however, keep in mind that most cases of mercury poisoning from fish and seafood consumption are found in people who are not eating these foods in moderation. And if you do eat fish but are also good about regularly testing your levels, you can monitor and assess whether you need to reduce or eliminate fish in your diet.

“For most people, the level of mercury absorbed by eating fish and shellfish is not a health concern. Overall, fish and shellfish are healthy foods. They contain high-quality protein and other essential nutrients, are low in saturated fat, and contain omega-3 fatty acids, a type of essential fatty acid. A balanced diet that includes fish and shellfish can contribute to heart health and children's growth and development,” reports the University of Michigan (Michigan Medicine).

Try to steer clear of the more predatory fish such as king mackerel, tilefish, tuna and swordfish. The FDA provides a great chart on which types of fish and seafood are lower or higher in mercury.

Pregnant and breastfeeding women may be especially fearful to consume fish and seafood, but there is evidence which has shown that fish consumption (in moderation and with low mercury level fish) could lead to healthier development, better gut health and a lower risk of obesity in children.

The 2015-2000 Dietary Guidelines for Americans recommends eating at least eight ounces of seafood (less for young children) per week based on a 2,000 calorie diet. Women who are pregnant or breastfeeding can eat eight to 12 ounces of a variety of low mercury level seafood per week.

Most fish oil supplements seem to have little to no mercury, however, always consult a competent healthcare professional regarding supplements.

If you are diagnosed with mercury poisoning and eat a lot of fish and seafood, your doctor will probably advise that you stop consuming these foods for the time being. You may also need to undergo chelation therapy, which is a treatment for heavy metal poisoning.

“Chelation therapy is an FDA-approved therapy—for treating mercury, lead, and other types of heavy-metal poisoning, as well as for iron overload (hemochromatosis) and some types of anemia. A chelating agent infused into the bloodstream binds to these toxins. The kidneys filter out the chelating agent and bound metals, which are then urinated away,” according to Harvard Health.

There is some evidence that the following may help to rid the body of mercury and other toxins:

Note that this blog is not intended to scare you away from eating fish and seafood. The goal is to emphasize the importance of moderation with any food group and being proactive about getting your heavy metal and toxin levels tested.

pH Toxins
pH Nutrition
Minerals - The Forgotten Nutrient: Your Secret Weapon for Getting and Staying Healthy