Watercress Can Make You Healthier (Especially if You Smoke) 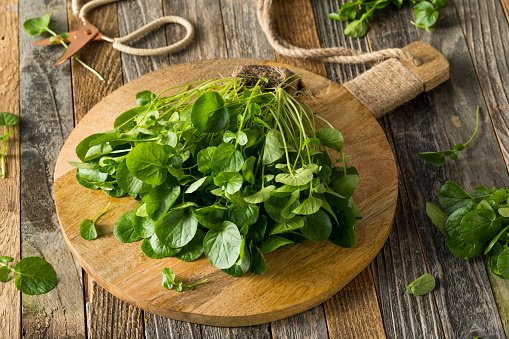 Watercress is an aquatic plant with succulent leaves. It is native to Europe and Asia and is among one of the oldest known leaf vegetables consumed by humans. Traditional English tea sandwiches usually have watercress, and in Britain watercress was often referred to as “poor man’s bread.” It was inexpensive to eat plain watercress between two pieces of bread.

However, “Father of Medicine” Hippocrates saw the value in this peppery-flavored green. He reportedly established his first hospital beside a stream, so he could grow watercress to treat his patients.

He may have been onto something, because watercress contains many essential vitamins and minerals and may do wonders for your health.

Watercress may reduce DNA damage, which may lead to cancer.

The American Journal of Clinical Nutrition published a study that shows watercress may reduce lymphocyte (type of white blood cell) DNA damage, especially in smokers. The study examined 30 men and 30 women (30 smokers and 30 non-smokers). Subjects were given 85 grams of raw watercress for 8 weeks while still maintaining their habitual diets. Researchers saw a reduction of lymphocyte DNA damage by more than 20 percent, and they saw a greater reduction in the group of smokers. “The results support the theory that consumption of watercress can be linked to a reduced risk of cancer via decreased damage to DNA and possible modulation of antioxidant status by increasing carotenoid concentrations,” the study reports.

If you smoke and won’t kick the habit, you really may want to consider eating more watercress.

A study conducted by the University of Pittsburgh found that watercress extract may detoxify carcinogens in smokers. The study examined 82 cigarette smokers. Some of the smokers were given 10 milligrams of watercress extract mixed with 1 milliliter of olive oil for four times a day. The remaining smokers were just given a placebo. All smokers continued their regular smoking habits throughout the trial.

“Participants who lacked two genes involved in a genetic pathway that helps the antioxidant glutathione remove carcinogens and toxicants from the body saw an even bigger benefit to taking the watercress extract, which increased their detoxification of benzene by 95.4 percent, acrolein by 32.7 percent and crotonaldehyde by 29.8 percent,” the study reports.

Watercress may help reduce your risk for Alzheimer’s and cardiovascular disease.

Several sources, including the National Institutes for Health (NIH), support that vitamin K may reduce the risk of Alzheimer’s and cardiovascular disease. This vitamin helps form and strengthen the bones and limits neuronal damage in the brain, which is helpful in treating Alzheimer's disease. Vitamin K is by far the most prominent nutrient in watercress, with more than 100% of the daily recommended value.

There are many more reasons why you may want to incorporate this delicate, leafy green into your daily diet.

One cup of raw watercress contains 15 essential vitamins and minerals Some of them include:

Watercress is very nutritious and is a vegetable I have never tried. My goal is to find it and incorporate it into my diet. Sometimes we get too busy to chop up fruits and veggies. But it appears I can easily throw watercress in a pineapple and green smoothie or sprinkle some over soup.

When I have more time in the kitchen, I plan to try this watercress and mint salad.

It’s so inspiring to know there are foods out there that may help prevent some of the most life-threatening diseases.

Healthy food is some of the best medicine.

What are some of your favorite recipes with watercress?