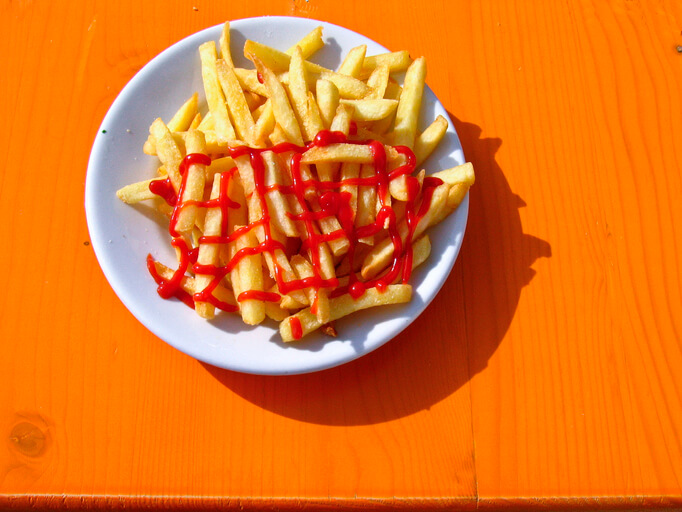 Potatoes are the most consumed vegetable. Yes, they are technically a vegetable but are more nutritionally similar to starches.

Reportedly, Americans eat an average of 115.6 pounds of white potatoes per year. And it’s estimated that two-thirds of these white potatoes we are consuming are prepared as French fries, potato chips and other frozen and processed potato products.

In other words, many Americans are consuming white potatoes as junk food.

Obviously, this is not a good thing!

A recent study, published in The American Journal of Clinical Nutrition, found evidence which suggests that fried potato consumption is associated with elevated mortality.

The study included 4,400 participants (2,551 women and 1,849 men) in the age range 45-79. Researchers took inventory of the participants’ potato consumption (including fried and unfried potatoes) through a food questionnaire.

Why were sweet potatoes not included in this study?

Regarding consumption of white potatoes, participants were categorized as follows:

Overall, most of the participants consumed potatoes two to three times a month. The researchers followed up with the participants after eight years of taking note of their white potato consumption.

During the eight-year follow up, 236 of the participants had died. Also know that the researchers considered possible variables that could have had an influence such as weekly alcohol consumption, physical activity, total energy intake, BMI, adherence to a Meditterranean diet, ethnicity, smoking habits and more.

So perhaps it is important to understand that it is not only important to focus on what you eat but also how you prepare the food you eat.

“The use of fried potatoes is probably associated with a higher risk of diabetes and other comorbidities for several reasons, such as cooking with trans fats,” the study report says.

Trans fats are fairly easy to use, because they last a long time and are inexpensive to produce. Reportedly, “many restaurants and fast-food outlets use trans fats to deep-fry foods because oils with trans fats can be used many times in commercial fryers. Several countries (e.g., Denmark, Switzerland, and Canada) and jurisdictions (California, New York City, Baltimore, and Montgomery County, MD) have reduced or restricted the use of trans fats in food service establishments.”

Some other foods that contain trans fats include donuts, cookies, frozen pizza and biscuits. Small amounts of trans fats are naturally found in some meats and dairy products.

White potatoes in general (even ones that are not fried) tend to get a bad reputation because “[p]otatoes are rich in starch and have a high glycemic index, which has been associated with an increased risk of developing obesity, diabetes, and cardiovascular disease (CVD),” according to the study report.

“However, compared with other common carbohydrate sources, potatoes have a low energy density because of their high water content. In addition, potatoes provide other important micronutrients, which are all associated with a decreased risk of morbidity and mortality. Therefore, potatoes represent a contradictory food because they contain both macro- and micronutrients with possible beneficial and harmful effects on health.”

So clearly we have to be mindful of how we prepare our  foods, even if they are vegetables. Fried foods may taste delicious, but consuming too much of fried foods may be damaging to  our health. Moderation is key. When prepared in a healthy manner, white potatoes may have great nutritional benefits, but this does not mean that you should eat them daily or even weekly.

Consult a competent healthcare professional about your diet. There is no one-size-fits-all approach when it comes to good nutrition.