For Postmenopausal Women, Having More Junk in The Trunk May Be Better Than Being Thick in the Waist 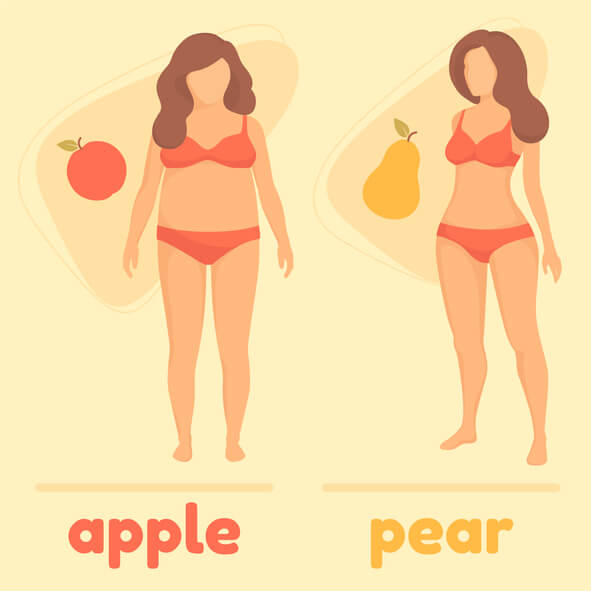 Fat. We all have it, and we all need it.

Actually, many people tend to fear fat. But fat is important and serves many purposes for our bodies. These include storing energy, absorbing fat-soluble nutrients (such as vitamins A, E, D and K), keeping us warm and protecting our vital organs.

And many people may not realize that fat is considered to be an organ in itself.

“Research suggests that fat cells — particularly abdominal fat cells — are biologically active. It's appropriate to think of fat as an endocrine organ or gland, producing hormones and other substances that can profoundly affect our health,” reports Harvard Health.

(One of these hormones, which we have previously discussed, is adiponectin).

Each person carries fat in different ways. For example, some of us may carry our fat more in our legs and buttocks, some may carry it mostly in the stomach and arms and others may carry fat pretty evenly throughout the body.

Fat which accumulates in the lower body (pear shape) is usually subcutaneous. Fat in the abdominal area (apple shape) is usually referred to as hard or visceral fat. And usually where our fat ends up is influenced by several factors, including heredity and hormones, according to Harvard Health.

Subcutaneous fat is the fat found directly under the skin. You can actually pinch this type of fat. It is not necessarily bad for your health and may manifest itself as a soft and flabby waistline.

Hard or visceral fat, is usually found deeper within the body. It is generally harder to lose and is not very attractive. A hard belly, large waist or a protruding belly may be all due to a large accumulation of visceral fat.

Having excessive visceral fat may be dangerous, because this type of fat grows deep inside the stomach and may wrap around your vital organs, increasing the risk of developing health issues such as heart disease, diabetes and fatty liver disease.

Reportedly, individuals can have very little subcutaneous fat (fat below the skin) and still have a lot of fat within the abdomen and inner organs. There is even some concern that visceral fat may become inflamed and scarred and affect our metabolism adversely, making it difficult for us to lose weight. There is even evidence that despite weight loss, once fat tissue becomes scarred, it may not fully recover.

“Fat in obese people can suffocate and struggle for oxygen supply, due in part to the increase in the fat cells' size. As cells get bigger they become distressed and struggle for oxygen which triggers inflammation in the fat tissue. The inflammation spills over from fat tissue into the bloodstream and is eventually measurable in the circulation by a blood test,” according to one source.

A recent study (and apparently the first of its kind) examined postmenopausal women who all had a normal body mass index (BMI) and compared their cardiovascular risk in relation to where they mostly carried their fat.

It’s important that this study involved postmenopausal women because due to hormonal changes, this particular population is prone to changes regarding where their fat is distributed.

“Postmenopausal women are prone to metabolic alterations resulting, in part, from a shift from subcutaneous to intra-abdominal visceral fat,” according to one report discussing the study.

The women in the study were examined again for follow-up after a median 17.9 years. From the point of this follow-up, 291 incident CVD cases occurred, including coronary heart disease and stroke. Interestingly, the results revealed, “...neither whole-body fat mass nor fat percentage was associated with CVD risk.”

“Participants who had both high trunk fat and low leg fat had a more than three-fold increased risk of CVD when compared with those in the opposite groups of the two measures.”

So if you are someone who tends to carry more weight in the belly, you may also have to be especially proactive.

And the good news is that you can take control by eating healthily, exercising regularly and implementing alternative therapies such as the Cryo T Shock, a form of cryotherapy that kills fat cells.

Follow a healthy lifestyle and, as always, try to maintain nutritional balance by taking a comprehensive nutrient test in order to definitively determine if you have any nutrient imbalances or deficiencies which may be hindering your ability to lose weight. If you have imbalances, a competent healthcare professional can help you make the necessary dietary changes and possibly recommend quality supplements you can include in your diet.