Have Loved Ones in Senior Living? Don’t Let Them Get Dehydrated 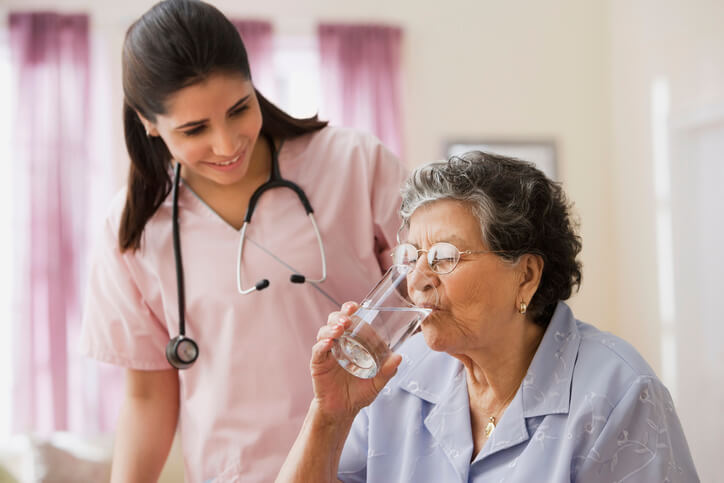 “A competent patient has the right to refuse foods and fluids even if the patient will die. The exercise of this right, known as voluntarily stopping eating and drinking (VSED), is sometimes proposed as an alternative to physician assisted suicide,” reports the National Institutes of Health (NIH).

As you can probably imagine, this is a very sensitive and controversial subject. If you do some research on the topic, you will see reports with opposing views on whether this practice should even be legal. Some believe it is inhumane, as it can take days for a patient to die once they are no longer receiving food and liquids. Others say it is not an uncomfortable death once the initial feeling of thirst goes away.

In one story where an elderly woman chose terminal dehydration, she died nine days after she stopped drinking fluids.

“Although her death was pain free and she was surrounded by love and support during those final days, she desired a different kind of death: one in which she was legally permitted to request and discuss an assisted death with her GP. The fact that she made a decision to stop drinking, and persevered with that decision until the end, shows her determination and courage in wanting a choice at the end of life,” according to this report discussing her case.

This form of physician-assisted death is something you may be more likely to see in hospice and palliative care, where there are primarily older people.

But there are also many elderly people living in senior communities who are dehydrated -- and not by choice! In many cases, these dehydration cases are not due to any neglect or wilful act by nursing home staff. It just so happens that keeping elderly people hydrated is not an easy job, and it is extremely important that everyone be proactive about this issue.

“Dehydration in the nursing home happens when the nursing home resident passes their urine and doesn’t drink enough water to compensate for their losses. The body is always losing water through urine, stool, breathing, and sweat. If these fluids are not replaced, the body will eventually not contain enough water to perform vital bodily activities,” according to this source.

“When the elderly nursing home resident becomes dehydrated, they are likely to have a certain set of symptoms and health complications from not having enough fluid. Some elderly people will not have a strong thirst drive and will not display symptoms.”

And a recent study conducted by the UCLA School of Nursing highlighted this issue of the elderly not getting an adequate intake of water. Apparently, “up to 40 percent of community-dwelling elderly people may be chronically underhydrated, which can lead to more severe dehydration and ultimately life-threatening infections and other health problems.”

According to one report which discusses the study, “...these conditions are likely to be under-recognized, bringing on health problems ranging from urinary tract infections to frequent falls.”

Why is this such an issue for the elderly?

One argument is that it is hard to monitor hydration status. In nursing home settings, it may be hard for a resident to communicate or always have someone tending to their hydration needs around the clock.

Salivary osmolality compares the ratio of water to certain chemicals that are naturally present in saliva. This measurement is made using a device called an osmometer. An osmometer is a noninvasive instrument, and you only need a saliva sample that is around the size of a teardrop.

“Salivary osmolality is becoming a reliable tool for determining underhydration and dehydration,” according to the report.

The higher the osmolality reading, the greater the level of dehydration.

The UCLA study used this effective tool to check hydration status in adults living in senior centers and staying at adult day care centers. Researchers found that elderly participants overall had higher osmolality (which means they were at a greater level of dehydration) compared to the younger adults in the study.

They also found that osmolality was higher in the morning hours (which is to be expected since most people do not drink water through the night while they are sleeping). In addition to this, osmolality was also higher in seniors with limited mobility. Another interesting result was that, overall, African-Americans had lower osmolality (which means these participants were more hydrated). The reason for this is not exactly known.

But here is what is particularly saddening…

The researchers discovered that there were certain psychological barriers that prevented certain seniors from being hydrated. For example, some feared overnight incontinence. So perhaps they made it a point to restrict their water intake before bedtime.

This is a major problem because inadequate hydration, especially in seniors, is very dangerous.

“The most closely linked are urinary tract infections. Many seniors are underhydrated for a period of time, and when they are exposed to a virus or bacteria they are more likely to develop an infection, such as urinary tract infections, pneumonia or other respiratory diseases. And they will be treated for the infection, but the underlying underhydration will not be recognized. Thus, an opportunity to educate the individual about adequate fluid intake is missed," said one of the professors involved in the study.

And underhydration in the morning can increase the risk of falls. We have discussed how falling at an elderly age is especially dangerous. Furthermore, complications of dehydration in the elderly can include seizures, brain swelling (this can happen if the person drinks too much fluid after discovering he or she is dehydrated), kidney failure and coma.

Seniors in senior living and nursing homes need to be encouraged to drink water and other fluids. There are also creative ways to get people to drink more water if they tend to not be big water drinkers. Some of these methods include:

Eating a variety of fruits and veggies is key in getting all of the essential vitamins and minerals we all need to stay healthy. These types of foods also tend to be very rich in water. For example, cucumbers are about 95 percent water. Watermelon is about 90 percent water. These nutrient-dense foods are also great sources of potassium, a mineral that helps balance sodium levels in the body. Both potassium and sodium are two important electrolytes we need to help maintain fluid and electrical balance in the body.

If you have an elderly loved one in a nursing home or you care for your loved one at home, make sure there is always a fresh water pitcher by their bed or in sitting areas. This may encourage drinking more water. And if someone has an issue with communicating due to a speech problem or illness, they won’t have to ask for the water because it is already within reach.

Some people prefer ice-cold water, while others prefer more room temperature. Find out what your patient or loved one prefers and once you know their preference, you may be able to get them to drink more fluids.

I don’t think you can ever get too old for popsicles! They are delicious, soothing when you have a sore throat or an upset stomach, can cool you down on a hot day and be very hydrating if you make homemade popsicles from fruit. You can even infuse them with herbs and spices, like ginger and basil, for more flavor and beneficial nutrients.

Check out this strawberry basil popsicle recipe. All you need are three ingredients: fresh strawberries, fresh basil and honey.

Finally, there are machines like the InBody machine which in my opinion should be present in all nursing homes. This machine is able to tell within minutes whether a patient is dehydrated.