What you can learn about ‘love hormones’ from a prairie vole 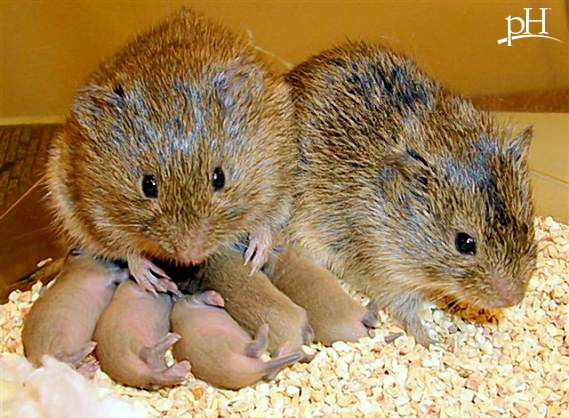 Are humans like prairie voles? Yes, according to scientists at Florida State University. Prairie voles share with humans a pair bond, or “a stable relationship between a breeding pair of animals that share common territory and parental duties.” These animals go “steady” only six hours after mating. Even without sex, they pair up after 24 hours of living together! They protect each other from strangers, and avoid mating with amorous new prairie voles. What’s more, they are together for life.

Only about 3 percent of mammals are monogamous. That means scientists have found a biological gold mine in hormonal, loyal, dual-parenting prairie voles. Studying the brains and blood hormone levels of these animals provides insights into what the “relationship hormones” do.

Dopamine is a neurotransmitter. When female prairie voles were injected with a similar chemical, they bonded with a male without actually mating. In humans, sex triggers a dopamine surge. The dopamine rollercoasters through your brain. Dopamine is also the main chemical involved in gambling, addiction and thrill-seeking activities.

When male prairie voles were injected with vasopressin, the same effect occurred—they bonded without mating. Humans with high vasopressin levels report better relationship quality, and men with an error in the vasopressin gene receptor (sort of a docking station in the brain) actually had more marital crises while being less likely to marry in the first place.

Oxytocin is known as the main human bonding hormone, released when couples cuddle or touch. When male and female prairie voles get a quick shot of the stuff, bonding ensues. In humans, oxytocin is like a drug—it literally stimulates the reward centers in the brain. Some scientists think that the drop in oxytocin after a breakup could be the trigger for depression. Other benefits include better wound healing, healthier stress responses and better perceived relationship quality, according to various studies. Finally, oxytocin stimulates maternal bonding with babies — even for foster mothers.

As you can see, chemicals are important in animals and humans. Simply exposing prairie voles to the opposite sex causes increases in neurons located in the pair-bonding parts of the brain, almost as though the brain is preparing itself to receive that dose of oxytocin.  So, if you have been feeling less than bonded, spend time with your fellow human or prairie vole. Engage in some cuddling, and see where the hormone wave can take you.

So how can you be proactive and maintain optimal levels of these bonding hormones?

Research shows blueberries and spirulina may improve dopamine levels. Keep your vasopressin receptors firing throughout the day by making gestures of affection each day (a hug, kiss, text, email, etc.). And naturally increase oxytocin levels by listening to soothing music, petting a dog, or giving/receiving a thoughtful gift.

Great writing style and something one can take home with! So is romance just a chemical thing nowadays?

More specifically, attraction is a "chemical" thing stemming from evolutionary causes. We need chemicals to rise and cause positive feelings when exposed to a potential mating partner in order to propagate the human or prairie vole race.

In humans, (likely) due to a highly developed cerebral cortex and small litter size (1 kid at a time), the human male cannot rely simply on a quick mating session (random hookup). At best, only one or two offspring will be born, and they have a worse chance of survival (education, nutrition, expensive SAT tutoring) due to their "accident" and "unwanted" status, not to mention the less favorable financial state of a single mother. Not the way you want to pass your genes on.

When the female is assured that the male will engage in mating sessions with her and her alone (keeping his parental resources with her and not with the "other woman's" babies, she knows her offspring will be well cared for. She is more likely to allow him to mate with her. Because humans are more intelligent and are influenced by an emotional brain center, we emotionally identify with historically symbolic and literal signs of loyalty (roses, engagement rings) and resources (fancy dinners, time spent planning an elaborate surprise). Neurohormonal changes as a result of these gestures increase bonding --there you have romance.