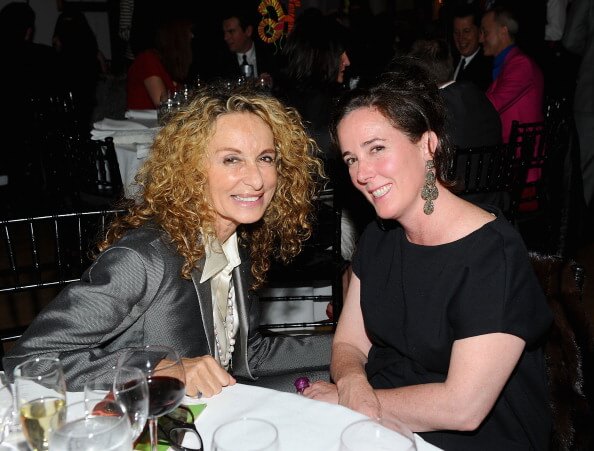 It just doesn’t make sense. Highly successful, married, a mother to a beautiful 13-year-old girl, found dead in her Park Avenue apartment in New York City’s Upper East Side, where she reportedly hanged herself with a scarf. A note was found at the scene, but details of this note have not been shared.

I’m talking about world-renowned American designer, who was known for her fun, colorful handbags -  Kate Spade. She was such a force to be reckoned with. Her total net worth was said to be around $150 million. Spade was also a philanthropist and touched many people, including celebrities who shared their shock and sadness on social media.

According to her husband, Spade was seeing a doctor on a regular basis and taking medication for depression and anxiety. Mr. Spade said that her serious bouts of depression only began about six years ago, at the age of 49.

Her older sister reported that the death was not unexpected. Her family had unsuccessfully tried to get her help in the form of inpatient hospitalization in the past.

Clearly, she was in a lot of pain and saw no way to get relief other than by taking her own life. Her death further illustrates that depression is a disease which is not cured by money, success or fame.

Spade was just 55-years-old. As a mother and woman pretty close to her age, this news deeply saddened me. So I quickly investigated whether  boomers (those off us born between 1946 and 1964), like Spade and myself, are more prone to depression.

And sure enough, baby boomers are at a higher risk for anxiety and depression.

According to a 2015 gallup poll, "In the U.S., one in seven baby boomers (14%) say they are currently being treated for depression, which is a higher rate than among other generations of American adults. Boomers are followed by Generation Xers, at 11%, whose figure matches the national average.”

“Baby boomers (21%) also lead adults in any other age group in having been diagnosed with depression at any point in their lives.”

“We know for certain that baby boomers have a higher prevalence rate of depression than the generation before them,” said Donald A. Malone, Jr., M.D., director of the Mood and Anxiety Clinic in the department of psychiatry and psychology at the Cleveland Clinic. “The fact remains that we are not sure why—but much of the research is pointing to daily stress as a precipitator of their depression.”

There is also credible evidence that women are at greater risk of becoming depressed than men. This is not surprising, however, because of various hormone changes that occur throughout our lives.

The National Institutes of Health (NIH) appears to confirm that “this heightened risk is associated with increased sensitivity to the hormonal changes that occur across the female reproductive lifecycle.”

For example, menopause may be a major cause of these hormonal changes and is usually associated with a significant decrease in ovarian estrogen production. According to the NIH,  “estrogen increases the effects of serotonin and norepinephrine, which are thought to be the neurotransmitters most related to the physiologic cause of depression.”

So a drop in estrogen levels has been associated with depression.

Some other reasons for boomer depression were highlighted in this article from The Guardian. “Some mental health experts argue that women are unhappier now than they used to be because their expectations are too high. They fail to achieve eternal youth and beauty, but are forced to live in a consumer culture that celebrates youth.”

Whatever the reason is for the increased risk of depression among boomer women, it is clear that it is a problem we cannot overlook. We have to be proactive about depression and take steps to reduce the likelihood of this horrible disease.

So how can we be proactive about depression?

Just one hour of exercise a week might help keep depression away. Try doing exercises you enjoy, like swimming, playing golf, going for a hike or practicing yoga. And remember, you must fuel your body properly to get the most out of your exercises. Avoiding a sedentary lifestyle is especially important after you reach the age of 50.

With that said, we always need to keep in mind that man or woman, young or old, nutrition may play a key role in helping prevent depression and reducing the symptoms of depression. Read here to learn about eight minerals that may help you with depression.

And if you are going through the changes involved with menopause, there are specific nutrients that can help with hormonal imbalance.

The key is to stay balanced. Furthermore, it is very important that as women we educate ourselves about what nutrients and activities we may need to adjust at different periods in our lives in order to remain mentally and physically healthy.