Move Over Quinoa. Sorghum Is in Town! 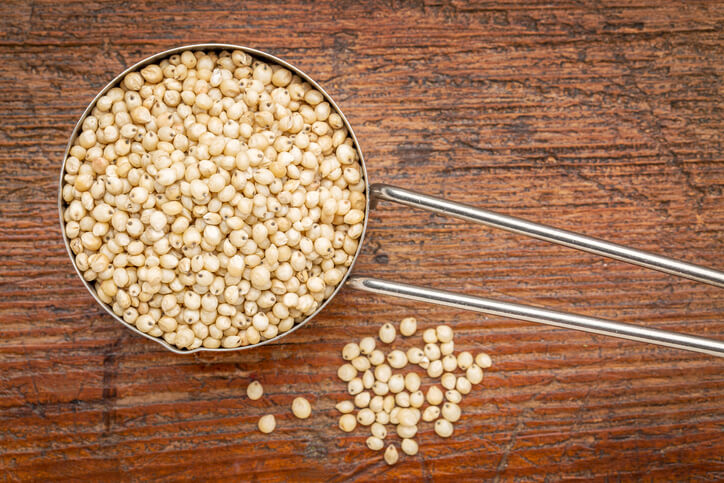 “Grains, commonly referred to as ‘cereals’ or ‘cereal grains’, are the edible seeds of specific grasses belonging to the Poaceae (also known as Gramineae) family,” reports the Grains & Legumes Nutrition Council.

There are also pseudocereal grains which are not part of the Gramineae family. “As such, they are not by definition ‘true’ grains, yet they are considered ‘pseudo-cereals’ since their overall nutrient composition is similar and they are prepared and used in similar ways to ‘true’ grains.”

There are also gluten-containing grains as well as naturally gluten-free grains.

(Gluten is a protein found in many grains).

Here are some grains which contain gluten:

(And then oats are a whole other story. They are naturally gluten-free, however, many store-bought oats get cross-contaminated with gluten before they reach our grocery store aisles. So if this happens, they are technically not gluten-free. You can read more about this and how to verify if something you are purchasing is gluten-free at Gluten-Free Watchdog).

A gluten-free diet is necessary for those who suffer from celiac disease, and some may exclude gluten from their diets out of preference. There are people who say that giving up gluten, as it is found in many not so friendly waistline foods such as processed breads and pastas, cakes and other sweets, helped them lose unwanted pounds. But, to be clear, there are plenty of gluten-free desserts and processed products that can cause weight gain if you do not eat them in moderation. Simply giving up gluten is not a magical solution to weight loss.

So I decided to do some investigating to see if this is a grain I may want to start regularly including in my diet.

Sorghum is an ancient cereal grain said to have been collected in South Egypt 8,000 years ago. Reportedly, it is the fifth most important cereal crop in the world “largely because of its natural drought tolerance and versatility as food, feed and fuel,” according to The Whole Grains Council.

In Africa and parts of Asia, sorghum’s main use has been for feeding humans. And for a while in the United States, sorghum was mainly used for livestock feed and biofuel. But sorghum has now become more popular in American restaurants.

“One minute a grain is best known as animal feed, and the next thing you know it's popping up on trendy restaurant menus. That's the starry path of sorghum — a tiny, beige, gluten-free whole grain that may be the new quinoa,” according to this 2016 news report.

“Chefs across the country are beginning to pepper their culinary creations with this versatile grain. Sorghum shows up in sides, mains and desserts at the health food restaurant Hugo's, which has several locations around Los Angeles.”

So what are some of the health benefits of sorghum?

“Sorghum, which doesn’t have an inedible hull like some other grains, is commonly eaten with all its outer layers, thereby retaining the majority of its nutrients.  Sorghum also is grown from traditional hybrid seeds and does not contain traits gained through biotechnology, making it nontransgenic (non-GMO),” according to the Whole Grains Council.

“Some specialty sorghums are high in antioxidants, which are believed to help lower the risk of cancer, diabetes, heart disease and some neurological diseases. In addition, the wax surrounding the sorghum grain contains compounds called policosanols, that may have an impact on human cardiac health. Some researchers, in fact, believe that policosanols have cholesterol-lowering potency comparable to that of statins.”

One report from the National Institutes of Health (NIH) says there is evidence that consuming sorghum had a positive effect on blood glucose levels and even appeared to reduce oxidative stress.

Furthermore, “Sorghum was also observed to be a suitable ingredient for the formulation of oral rehydration solutions and showed potential for use as a medical adjunct to boost immune responses in HIV-positive patients.”

So it appears that more research is needed. But sorghum may really be a superfood.

“The implication is that sorghum may have attributes superior to those of other staple grains, indicating its potential for innovative uses in commercial foods. More work is required to elucidate the health effects of sorghum when consumed by population groups that have not been traditional consumers of the grain,” according to the NIH.

Let’s take a look at the nutritional value of one cup of sorghum.

How can you incorporate sorghum into your diet?

Just like with other grains, sorghum makes a great side dish, mixed with fresh vegetables, spices and herbs. You can use sorghum instead of brown rice to change up your routine a bit.

Sorghum flour is also a popular gluten-free product you can use for baking. And what’s really cool about sorghum is that you can have popped sorghum as a snack (just like you would do with popcorn).

Overall, sorghum appears to be very safe. But as always, it’s a good idea to discuss with a competent healthcare professional what foods you are including in your daily diet, especially if you are pregnant, breastfeeding or have any existing health issues.

Have you tried sorghum? If so, what did you think?