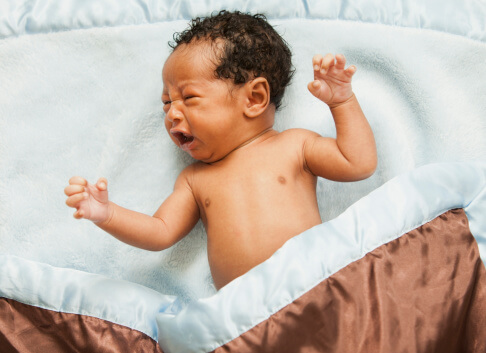 “I had not been informed of the need for infant vitamin D supplementation, or that we were at greater risk due to having dark skin, and I had no idea how catastrophic the effects of a vitamin deficiency can be.”

These are the words of Beverley Thahane, a 37-year-old mother in the UK, who lost her six-month-old baby, Noah, to a severe vitamin D deficiency.

Due to his deficiency, baby Noah developed rickets and reportedly died of cardiac arrest. Thahane said Noah had been suffering from unexplainable seizures.

“Noah’s death was completely preventable,” said a doctor in this video from BBC.

(Noah was of African descent).

In another report, the same doctor said, “I’m very concerned that what we see is only the tip of the iceberg. There are many more cases that we don’t know about.”

New research has found at least 50 children a year in the UK are getting rickets, according to BBC.

“Rickets is a condition that causes children to have soft, weak bones. It usually occurs when children do not get enough vitamin D, which helps growing bones absorb important nutrients [like calcium and phosphorus],” according to the National Institutes of Health (NIH).

Severe cases of rickets may also affect the brain or heart, as was the case with baby Noah.

How common is rickets?

This is actually not an easy question to answer, because rickets is not a reportable disease in the United States and national data are unavailable.

Several reports say rickets is pretty rare in the United States, however, some others say rickets is not a disease of the past due to poor nutrition, lack of sun exposure and malabsorption syndromes that affect how the intestines absorb nutrients.

Reportedly, “As late as the 1940s, rickets was a common childhood ailment, killing thousands of children annually until doctors learned that vitamin D in milk and sunlight could largely prevent it.”

This means that breastfeeding mothers need to be especially proactive about making sure their babies receive sufficient vitamin D.

(Rickets was eradicated from the UK during the second world war when food was fortified with vitamins).

Perhaps, what is most tragic about the story of baby Noah is that his death was completely preventable. His mother was not told that her baby should have been taking vitamin D supplements.

And the fear is that there are several other mothers who are also not being given this life-saving information.

The doctor quoted earlier said that despite these guidelines and responsibilities of the staff, many women and parents (specifically 85%) are simply not told this information.

As consumers, we trust our doctors and other medical experts and rely on them to inform us of any important information regarding our health and the health of our children. But clearly, there are times where miscommunication (or a lack thereof) and negligence may prevent us from getting this vital information.

So how much vitamin D should your baby be getting?

Always talk to your doctor or a competent healthcare professional, but here are some general guidelines provided by the Centers for Disease Control and Prevention (CDC):

To avoid developing a vitamin D deficiency, the American Academy of Pediatrics recommends breastfed and partially breastfed infants be supplemented with 400 IU per day of vitamin D beginning in the first few days of life. Vitamin D supplementation should be continued unless the infant is weaned to at least 1 liter per day (about 1 quart per day) of vitamin D–fortified formula. Any infant who receives <1 liter or 1 quart of formula per day needs an alternative way to get 400 IU/day of vitamin D, such as through vitamin D supplementation.

How else can you be proactive about rickets and vitamin D deficiency in general?

In another tragic story, a baby died of rickets due to being on a strict vegetarian diet. So it is extremely important to consult a qualified healthcare professional before you put your baby on a diet that eliminates certain foods and food groups.