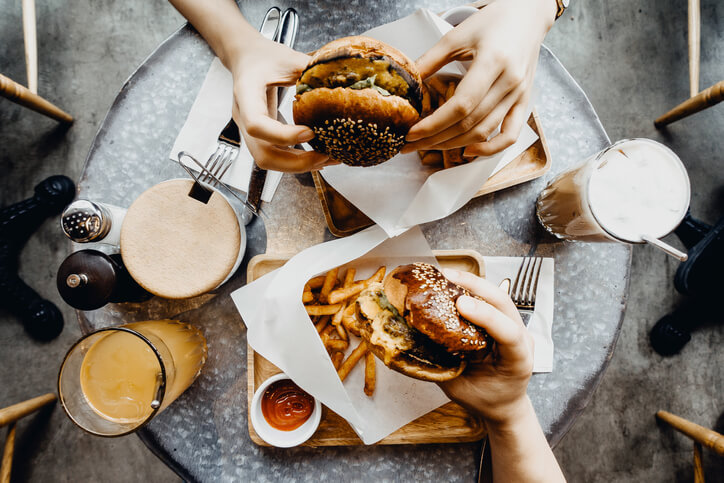 Think Dining Out is Pricey? What About the Expense Of Your Health?

Eating is said to be one of America’s greatest pastimes. But imagine a world without restaurants and drive- thrus. Yes, life would be less convenient. But the truth is that we’d all probably be much healthier.

According to Dariush Mozaffarian, the dean of the Friedman School of Nutrition Science and Policy at Tufts University in Boston, "On any given day, nearly one-third of American adults eat at a full-service restaurant, and nearly half at a fast-food restaurant,” (Medical Xpress).

Mozaffarian is a senior author of a recent study that examined the nutritional value of meals at both full-service and fast-food restaurants. The results revealed that 70 percent of fast-food meals consumed in the United States were of poor nutritional value.

I guess that’s not a huge shocker considering that fast-food meals usually consist of ultra-processed foods such as french fries, white bread and onion rings. Not to mention, fried foods are usually fried in soybean oil.

But what may be a bit surprising to you is that the study results also revealed that around half of the meals consumed in full-service restaurants were also considered to be of poor nutritional value.

“Less than 0.1% of the restaurant meals analyzed during the entire study period—2003 to 2016—were considered to be of ideal nutritional quality,” according to the report discussing the study.

The study also claims that currently the typical American gets one out of every five calories they eat from a restaurant.

"Today, more American adults are sick than are healthy, and much of this is due to diet-related illness. Looking for healthier restaurant options should be a priority for all Americans," said the lead study author mentioned earlier.

Diet-related diseases may include hypertension, diabetes, heart disease, cancer, scurvy and even depression.

In order to grade the nutritional value of meals, the researchers used an American Heart Association diet score.

“Fast-food meals accounted for 12% of all the calories eaten. Full-service restaurant meals made up 9% of all calories consumed. During the study period [2003 to 2016], fast-food breakfasts went from around 4% of calories eaten to 8%.”

The study included a sample of more than 35,000 American adults. What’s particularly noteworthy is that quality of fast-food meals for whites and Mexican-Americans improved during the study period. However, this change and improvement was not seen in fast-food meals consumed by African Americans.

Furthermore, “For people with college degrees, poor-quality meals from fast-food restaurants dropped from 74% to 60% during the study. For people without a high school diploma, 76% of fast-food meals were of poor nutritional value.”

The amount of sodium (salt) found in most restaurants and fast-food joints is also alarmingly high and in many cases dangerous.

I’m not suggesting that you should never eat out again, but we might want to leave that to once a week or just for special occasions. And when you do go out to eat, go for nutrient-rich foods such as leafy greens and other veggies, fish, sweet potatoes and whole grains.

Try to avoid fried foods, and don’t be afraid to ask your server what kind of cooking oil the kitchen uses. If you are eating fast-food, you know what you’re getting into. Don’t do it often. And if you currently have metabolic issues, I highly suggest avoiding fast-food until you get your health under control.

Most importantly, I want people to understand that cooking nutritious foods at home can be  enjoyable and satisfying. Make it fun and involve your kids, family and friends by sharing recipes, growing a garden, visiting the farmers’ markets and scheduling weekly meal prep.