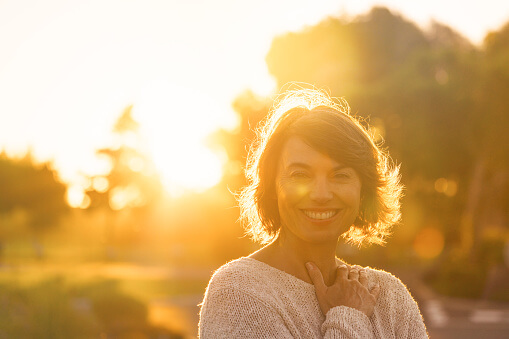 Vitamin D is one of those nutrients that is crucial for maintaining our overall health. For one, it is just as important as calcium when it comes to building and maintaining strong bones. Getting enough vitamin D helps the body absorb calcium.

“Vitamin D has other roles in the body, including modulation of cell growth, neuromuscular and immune function, and reduction of inflammation.”

And according to one report, vitamin D may balance insulin levels and help with the management of diabetes, support lung function (we previously blogged about vitamin D’s ability to treat asthma attacks) and cardiovascular health and even influence the expression of genes involved in cancer development.

Vitamin D and cancer prevention has been a topic of interest to medical professionals for quite some time.

One of our earlier blogs discusses a study that found evidence suggesting higher vitamin D levels are associated with a reduced risk in cancer. But this study was on a relatively small scale (involved no more than 4,000 people) and only included women.

Now, a recent study that is much larger and includes both men and women is finding similar evidence for both overall and site specific cancer risk.

Reportedly, in the past most of these types of studies were done on European and American populations. Research with Asian populations has been limited.

“As Vitamin D concentrations and metabolism can vary by ethnicity, it is important to find out whether similar effects would be seen in non-Caucasian populations,” according to a report on the study.

Other information including medical history, diet and lifestyle were also taken into account.

Over the course of the study, researchers had to be mindful that vitamin D levels were likely to be higher during the summer and autumn months, when there is more sun, compared to winter and spring.

(As you probably already know, vitamin D is made by the body when the skin is exposed to ultraviolet rays from the sunlight).

With the variation of sun exposure in mind, the researchers split the participants into four groups (from the lowest to highest levels of vitamin D).

The participants were then monitored on average for 16 years! And 3,301 new cases of cancer were found.

“After adjusting for several known cancer risk factors, such as age, weight (BMI), physical activity levels, smoking, alcohol intake and dietary factors, the researchers found that a higher level of vitamin D was associated with a lower (around 20%) relative risk of overall cancer in both men and women,” according to the report.

“Higher vitamin D levels were also associated with a lower (30-50%) relative risk of liver cancer, and the association was more evident in men than in women.”

No association was found for lung or prostate cancer.

“The authors say their findings support the theory that vitamin D may protect against the risk of cancer, but that there may be a ceiling effect, which may suggest that there are no additional benefits beyond a certain level of vitamin D.”

So how much vitamin D do you need?

Every person is different, but according to the NIH the recommended dietary allowance (RDA) for a male or female between age 19-50 is 15 mcg.

How can you be proactive about getting enough vitamin D?

“It is estimated that sensible sun exposure on bare skin for 5-10 minutes 2-3 times per week allows most people to produce sufficient vitamin D, but vitamin D breaks down quite quickly, meaning that stores can run low, especially in winter,” according to this report.

“Recent studies have suggested that a substantial percentage of the global population is vitamin D deficient.”

This means we have to be especially proactive about getting vitamin D. And one of the challenges is that not many foods naturally contain vitamin D.

“Very few foods in nature contain vitamin D. The flesh of fatty fish (such as salmon, tuna, and mackerel) and fish liver oils are among the best sources. Small amounts of vitamin D are found in beef liver, cheese, and egg yolks,” reports the NIH.

“Fortified foods provide most of the vitamin D in the American diet. For example, almost all of the U.S. milk supply is voluntarily fortified with 100 IU/cup...Other dairy products made from milk, such as cheese and ice cream, are generally not fortified. Ready-to-eat breakfast cereals often contain added vitamin D, as do some brands of orange juice, yogurt, margarine and other food products.”

So if you are vegetarian or vegan or perhaps live in a climate where there is not a lot of sun, getting your vitamin D may be particularly challenging.

Other factors that can contribute to a vitamin D deficiency include:

The only way to really know where you stand as far as your vitamin D levels are concerned is by getting a nutrient test.

And when it comes to cancer prevention, being nutritionally balanced in all the essential vitamins and minerals is key. So a nutrient test will help you determine exactly what your body needs as an individual.

Once you know your results, you can tailor a plan with your doctor to make sure your body is balanced and ready to fight diseases, like cancer, that threaten us all.