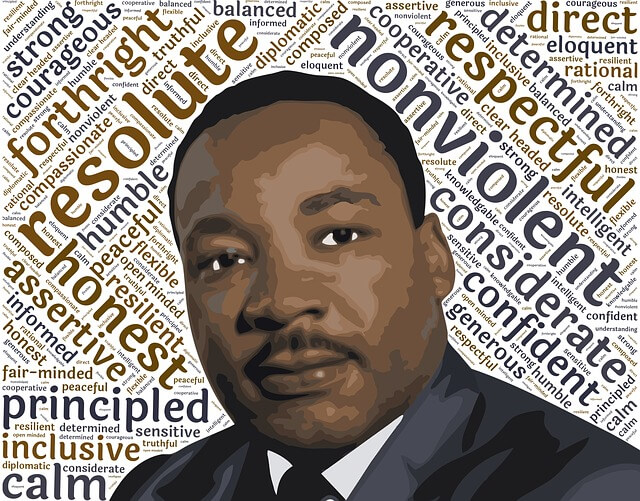 Martin Luther King is known for his tireless fight for civil rights. But what you may not know is that he suffered throughout much of his life from something many Americans currently have -- depression. In fact, it has been reported he had severe depression.

In 1967, King’s personal physician said to him, “Martin, I think you’re depressed. I think you would benefit from specialist treatment by a psychiatrist.”

King, understandably, had much to be depressed about. He lived during a period when his race made him the target of hatred and violence. But King also reportedly suffered from depression long before he became a major force in the civil rights movement.

Multiple reports, including one from Time Magazine, state King tried to commit suicide twice before the age of 13 by jumping out of a second-floor window from his home. The first attempt was due to his grandmother being injured, and the second attempt was because she actually died from a heart attack.

King was also reportedly hospitalized throughout his life for periods of “exhaustion.” He lost interest in most things, couldn’t concentrate and was low in energy. Some say he had manic depressive illness, also called bipolar disorder. His impairments or abnormalities may be difficult to imagine when you consider the hundreds of motivational speeches he delivered and peaceful marches he led (all the work he did, in general).

But every day, many people function "effectively" with depression. There are even research studies that suggest depression may increase our ability to feel empathy towards others. One columnist suggested, “King's nonviolent resistance can be understood as a politics of radical empathy, an accepting of one's enemies as part and parcel of advancing one's own agenda.”

Indeed, some people may not even realize that they are depressed. This does not, however, mean that depression should be ignored or swept under the rug.

So as we honor the work and bravery of this amazing leader with such a magnificent mind, let’s also acknowledge how we can be proactive about depression because it remains one of the most common mental disorders in the United States. It is also the leading cause of disability worldwide.

Suggestions on how to be proactive about depression.

I have spent countless hours trying to provide some direction to family and friends who suffer from depression. I have also written many articles about it and am always excited when new research confirms what I have been doing to avoid this crazy illness.

Yoga: Last year, I discovered  a series of studies which suggest that yoga may be a very effective way to treat depression.

Yoga is one of the top 10 complementary health approaches to health. More than 13 million adults in the U.S. practiced yoga in the past year or so, and 58 percent report using yoga to maintain their health and well-being (this includes mental health). Yoga helps put you in a meditative state and release stress, which may help with symptoms of depression.

In one study, researchers found that breathing-based yoga practiced for just a couple of weeks helped people with depression who were not responding well to antidepressant medication. And good breathing  is critical in order to get oxygen to your brain to remain healthy.

Magnesium: More recently, I discovered a study from the University of Vermont.  This is the first clinical trial done on magnesium for depression in the United States. It confirmed what I have experienced with using magnesium in my family. Magnesium supplementation may indeed be safe and effective for the treatment of depression.

Over the counter magnesium chloride was used to deliver 248 milligrams of elemental magnesium each day over a six week period to 126 adults. Those in the control group received no treatment.

The researchers found that in 112 participants, consumption of magnesium chloride led to great improvement in depression and anxiety symptoms.

The conclusion from the study was as follows:

“Daily supplementation with 248 mg of elemental magnesium as four 500 mg tablets of magnesium chloride per day leads to a significant decrease in depression and anxiety symptoms regardless of age, gender, baseline severity of depression, or use of antidepressant medications. While the cross over design of this trial is robust in controlling for internal biases, it would be reassuring to see the results replicated in larger clinical trials that test long term efficacy and provide additional data on subgroups. However, this efficacy trial showed magnesium supplements may be a fast, safe, and easily accessible alternative, or adjunct, to starting or increasing the dose of antidepressant medications.”

Clearly the magnitude of the new study should not be understated. 10 to 30 percent of patients with depression either fail to respond to antidepressants or experience only mild improvements paired with severe side effects. Many of these side effects caused by prescribed medications may be the result of nutrient depletion. Being nutritionally balanced is critical for preventing and treating depression.

So if you feel like you are battling depression, find a doctor who will evaluate this new study and prescribe the right amount and type of magnesium for your condition.

Also consider taking a yoga class or even looking up yoga tutorials on YouTube. Be proactive about learning how to locate treatment services in your area and other ways you can reach out for help.

Overcoming and managing depression is often about taking whatever small steps you can. It may involve exercise, nutrition or counseling so you can feel better and get mentally healthy.

Moving forward despite your hurdles is important as you make your way through life. As Martin Luther King said: “If you can’t fly, then run. If you can’t run, then walk. If you can’t walk, then crawl. But whatever you do, you have to keep moving forward.”