You Won’t Believe What Flaxseeds May Do For Your Gut 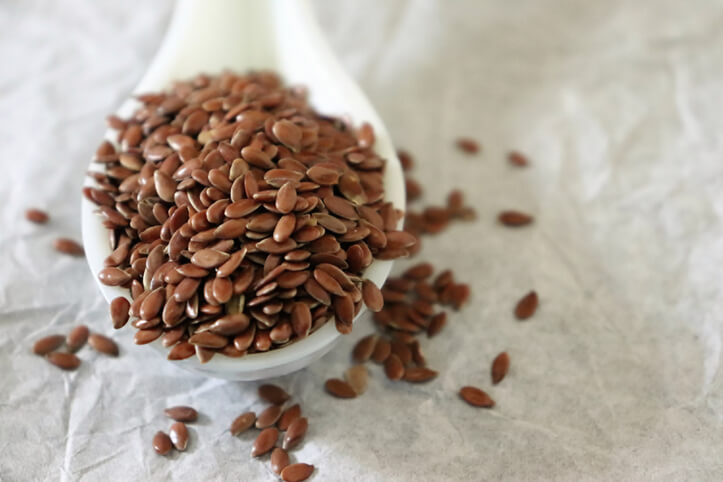 Flaxseed and linseed are both the same. It is a plant of the Linaceae plant family and a crop that has been grown for thousands of years. Some sources say that flax was one of the first crops to be domesticated.

“Flax was a major crop in ancient Egypt, and provided the fiber for linen, a refined yet sturdy textile that accompanied an Egyptian throughout life and even after death,” according to this report.

Flaxseeds are harvested from flax and have reportedly been used as medicine or eaten as a food since 5000 BC.

Flaxseeds are very nutrient-dense. They are rich in nutrients such as calcium, magnesium, selenium, phosphorus and potassium. These seeds are also a good source of omega-3 fatty acids, which are known to have brain and heart health benefits, as well as fiber.

Furthermore, “Flaxseed is a concentrated source of phytoestrogenic compounds called lignans, which have hormone-like effects on the body. These lignans are likely the reason why flaxseed can affect menstrual cycle length and menopausal symptoms [some sources say flaxseed may help ease menopausal symptoms]. It contains alpha-linolenic acid (ALA), a building block of omega-3 fatty acids. ALA has been shown to have numerous effects on the body including protecting the kidneys from damage,” according to Memorial Sloan Kettering Cancer Center.

So flaxseeds may be something you want to incorporate in your diet if you are not already doing so. But if you need more convincing, let’s focus on the fiber present in flaxseeds.

A recent study involving mice found that fermentation of flaxseed fibers in the gut may change  gut bacteria in a way that may improve metabolic health and help prevent obesity.

We’ve previously discussed the importance of the gut microbiome several times. Our guts contain trillions of microbes (also called flora, bacteria or bugs). All these bugs that live in our guts make up the microbiome. And if we don’t have a diverse and adequate amount of the good bugs, we may negatively impact our mental and physical health.

In addition to this, our gut bacteria plays a role in how we process sugar (our glucose tolerance). Some medical professionals consider someone with impaired glucose tolerance as prediabetic.

Researchers of the recent study put the mice on four different diets:

After this, the researchers took an analysis of the mice by noting:

On top of this, “At the end of 12 weeks, the researchers examined the animals' cecal contents—bacteria and other biological materials in the pouch that forms the beginning of the large intestine (cecum),” according to this report discussing the study.

“The high-fat group had fewer bacteria associated with improved metabolic health, lower levels of beneficial fatty acids and more of a bacterium linked to obesity when compared to the other groups. Bacteria levels in both the cellulose and flaxseed groups returned to healthier levels when compared to the high-fat group. The flaxseed group was more physically active and had less weight gain than the other high-fat diet groups.”

In addition to this, the mice that received flaxseed supplements exhibited better glucose control and had higher levels of beneficial fatty acids.

“When examining the cecal contents, the research team found evidence that the bacteria present ferment fibers from the thick, glue-like layer of the flaxseed shell. The bacteria that perform fermentation then produce more beneficial fatty acids.”

This isn’t all to say that you should avoid fat in your diet. Fat, good fat, is an essential nutrient we all need. But this study is some evidence to show the importance of fiber, particularly flaxseed fiber and how it affects the gut microbiota.

“The breakdown of dietary fiber in the gut—a process called fermentation—can produce favorable changes in the digestive system, such as an increase in beneficial fatty acids, which may reduce the production of fat tissue in the body and improve immune function.”

How to Incorporate Flaxseed Into Your Diet.

You can buy ground flaxseed (or buy it whole and grind it yourself) and simply add to fruit smoothies, oatmeal, yogurt and even your pancake batter. Flaxseed is a great ingredient for baking. Check out these blueberry flax muffins.

All you need are:

You can also cook with flaxseed oil.

Because flaxseed contains elements that may mimic estrogen, some medical sources warn women who have hormone-related cancers about including flaxseed in the diet. There is, however, still a lot of uncertainty surrounding this.

“Because of the estrogen-like activity of lignans in flaxseeds, scientists aren’t sure whether they’re harmful or helpful for preventing such hormonal cancers as breast cancer. This is because phytoestrogens act like estrogen and may affect the production and/or breakdown of estrogen by the body, and they affect the levels of estrogen carried in the bloodstream,” according to one source.

“On the contrary, some research has demonstrated that phytoestrogens don’t mimic estrogen at all. Rather they block estrogen and can even prevent the formation of blood vessels to tumors.”

Eating too much flaxseed may also cause an upset stomach. So as with any food, flaxseed should be consumed in moderation.

It is always best to discuss what you are including in your daily diet with a competent healthcare professional (especially if you are pregnant, breastfeeding or have any existing health issues).